Back to All News Articles

"Set the right context, including the circumstances that surround your issue[s] and your goal[s]. Once you do that, it [the context] becomes much more powerful. Purpose needs to be crystal clear answer needs to give meaning. It allows you focus on a cause or goal. Lastly, understand your audience." - Tay Guan Hin at CreativeMornings/SG 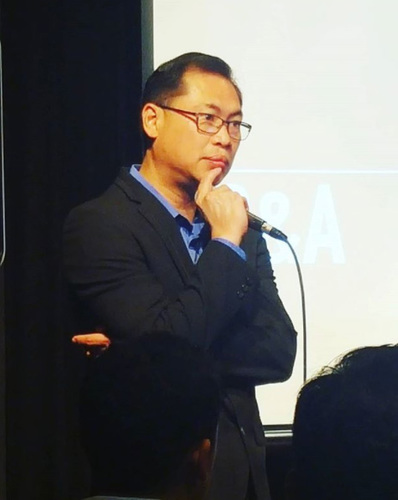 *Guan started his career with West Coast LA agency Kresser/Craig after he graduated from the Art Center College of Design in Pasadena, California. He joined Saatchi & Saatchi Singapore at the height of its success, producing award winning work for Toyota, Navy and P&G under the stewardship of David Droga. The next stint was with Leo Burnett as a CD, during one of the agency’s most prolific times which saw its best creative achievements as one of the hottest Asia Pacific agencies by Campaign Brief Asia Rankings, and winning prestigious blue chip accounts
like P&G, Singapore Air Force and SingTel.

Next up, Guan took on a regional role at Grey Worldwide KL/SG running GSK and won accounts such as Genting and Maybank. In 2005, Guan joined J. Walter Thompson as Southeast Asia ECD and was later promoted to the additional role of Global ECD for Unilever’s Lux. Since then, he has held global creative leadership roles for Abbott Nutrition, Shell Advance and Rimula/Rotella out of London. Additionally, he’s tasked to lead regional clients like Johnson and Johnson

In 2008-2009, he played a critical role in the Asia Pacific Creative Council to achieve Network for the Year in both Adfest and Spikes Asia. In 2010, Guan became the first Singaporean to serve as a Cannes Outdoor Jury President. He was also the first Asian to serve as a D&AD Jury Foreman and was the second Asian to ever chair a CLIO jury. Over 25 years’ experience, Guan, an engaging speaker and judge, has frequently been invited to the APAC Effie, Cannes, One Show, NY Festival, Spikes and Adfest.

Devoting the same passion and energy that goes into his work into mentoring young talents in Asia, Guan was instrumental in setting up the Singapore Crowbar Awards, AdFest’s Young Lotus, and the Award School Asia, which has worked assiduously to foster the nurturing of budding talents in this region.

Fun fact: Guan was actually a client of ours at Savvy whilst he was at (and still is) at JWT! At the CreativeMornings session, he drew upon different, influential advertisements from around the world, to convey how imperfection within humans can impact our way of thinking and interacting
in situations, based on the context that it poses: car crash survivors selling volvos instead of traditional salespeople, Paralympians accomplishing sports on every level, and even to what an organ donor typically appears to be "right" or "wrong" to the majority of our judgmental eyes.

We can't wait for next month's CreativeMorning sesh but for now, it's been a wild ride 2017! See you with your cup of caffeine in the new year!